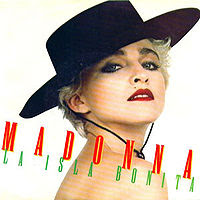 "Last night I dreamt I went to Manderley again" - so runs one of the most famous opening lines in English literature as Daphne Du Maurier's unnamed narrator recalls events from her past in 'Rebecca'. Madonna's been dreaming too, opening with "Last night I dreamt of San Pedro" in a song where she dredges up ghosts of summer's past and gets all dewy eyed about a holiday in Spain. Or maybe the Canaries or Balearics ('La Isla Bonita' translates as 'The Beautiful Island'). Somewhere hot anyway: "I want to be where the sun warms the sky, When its time for siesta you can watch them go by"

It's clear that Madonna is trying to break free of her New York dance roots and tap into her own family heritage with a song that tries its best to get under the skin of a sultry, Latin groove. Unfortunately, 'tried' and 'tries' are suitable adjectives for a track that overreaches itself somewhat in a welter of 'Carry On Señor' Mediterranean musical clichés that emanate from an ensemble of flamenco guitar riffs, bongos and maracas that combine to create a sound as stiff as a rusty hinge. Any laidback, summery vibe is sacrificed on the altar of everyone trying just a bit too hard, approaching it a bit too studiously and taking it all a bit too seriously. Madonna's Toreador hat and pained expression on that cover shot provide ample evidence for this by themselves (if the sleeve was gatefold then no doubt it would open to show her profile carrying a stuffed toy bull under her arm).

To hammer the point home, the promotional video had Madonna striking all manner of artily intense and wistful poses to show she's really hurting in her longing for another time and another place, but the general effect is of someone freshly landed on the Costa Brava who suddenly thinks they may have left the gas on back home. A set of dull lyrics do nothing to grease the wheels, managing as they do to cram in sambas, siestas, San Pedro and the occasional Spanish phrase into the mix until all that's missing is some backing cries of 'Ole!'

And yet for all it's po-faced posturing, 'La Isla Bonita' is only slightly less annoying than 'Agadoo' and is in essence little more than the bigger sister of 'Y Viva Espana' in the package holiday song sweepstake. But although it shares the same bloodline and all of the clichés, it has none of the campy joy that Sylvia brought to her tune:"Quite by chance to hot romance I found the answer. Flamenco dancers are by far the finest bet. There was one who whispered oh hasta la vista, each time I kissed him behind the castanet. He rattled his maracas close to me, in no time I was trembling at the knee" - oh yes, you can tell Sylvia enjoyed her two weeks in the Med.