1980 Fern Kinney: Together We Are Beautiful 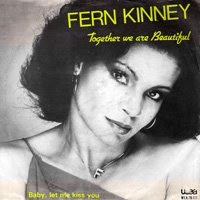 Number one for a single week in March, it's almost overstating the case to brand Fern Kinney and her song as a 'one hit wonder' because it almost lacks the substance to justify that decsription; it's almost like a ghost, the song that wasn't there. Not wishing to be unduly uncharitable, but I doubt few will remember it, much less recite any lyric other than the chorus. Not only that, but its hardly ever been anthologised, rarely played on the oldies stations, didn't chart at all in her native USA and Kinney herself slipped back into the obscurity she crept from shortly afterwards.

Even the song itself can hardly be bothered to justify it's own existence; a reggae tinged guitar riff chugs over a backing rhythm straight off a pre-set option on a Yamaha home organ, while Fern's take or leave it vibrato squeaks like a rusty hinge over the top with precious little conviction. But there again, the lyric itself hardly lends itself to too much emoting; I can't imagine many starry eyed lovers being overly enamoured hearing:"I've gone with better looking guys.He's gone with prettier looking girls. But now we're beautiful", while:"I am the rain, he is the sun, and now we've made a rainbow" is something a Poundstore greeting card writer might have binned as being too wet.

Ultimately, there's nothing inherently wrong with this, but any number one sitting in between Blondie and The Jam is going to have to punch hard to be heard and I'm afraid 'Together' simply doesn't make the weight.