1980 Kenny Rogers: The Coward Of The County 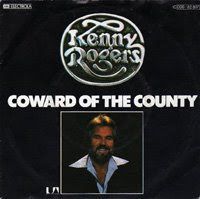 Kenny Rogers had been peddling his own brand of country lite country music since the late 1960's, but he mined a seam of inexplicable popularity in the late seventies/early eighties with 'Coward Of The County' racking up his second number one following 'Lucille' in 1977 and both songs had Roger Bowling as co-writer (though Rogers himself had a hand in neither).


A story in song, the titular 'coward' concerns supposed milksop 'Tommy' who, via a series of unfortunate events, reveals himself to not to be as yellow as the townsfolk think. In essence, 'Coward Of The County' is a typically mawkish morality tale delivered in Rogers' barely singing vocal style to a lazy metronomic beat that drifts along the middle of the road to the 'uplifting' dénouement where the world appears to be neatly put to rights. In tone and structure it's as inoffensive and unthreatening as Bambi on ice and the worst that can be said is that it has an earworm hook that serves to irritate the hater as much as it pleases the fan on karaoke night. But in their hurry to get to that feelgood, singalong chorus, I wonder how many of the 670,000 people who put this at number one actually stopped to consider what Rogers is singing about? Did Kenny himself give it any thought? Let's get all postmodern on its ass.........

"Everyone considered him the coward of the county. He'd never stood one single time to prove the county wrong. His mama named him Tommy, the folks just called him yellow, but something always told me they were reading Tommy wrong". Just what is going on here? Prove the county wrong? Against what? What has it been accused of, and why is it Tommy's job to sort it out? There must have been something he specifically did or didn't do to be branded 'yellow', but whatever it was, Rogers isn't telling.

"He was only ten years old when his daddy died in prison. I looked after Tommy cause he was my brothers son. I still recall the final words my brother said to Tommy:son, my life is over, but yours is just begun.Promise me, son, not to do the things I've done. Walk away from trouble if you can. It wont mean you're weak if you turn the other cheek. I hope you're old enough to understand: son, you don't have to fight to be a man". Well what happened to Tommy's mother I wonder? And if his father was as tough as Rogers claims, then surely nobody would dare to make fun of his son lest they get a punch on the nose for their troubles. Because I think this goes beyond simple nit-picking; this is lazy songwriting in the extreme. The  characters and events of 'Coward Of The County' are drawn with as much depth and precision as a Punch and Judy show, but it's the audacity of the next verse that takes the cake:"There's someone for everyone and Tommy's love was Becky. In her arms he didn't have to prove he was a man. One day while he was working the Gatlin boys came calling. They took turns at Becky.... there was three of them!"

So far, so 'I Spit On Your Grave' then - what Rogers is doing here is describing the gang rape of his nephew's wife, albeit in the same emotionless, laid back tone of a man reading the weather report. What's more, the 'wife' is a fleshless bone introduced solely to get raped, and her only characterisation comes via the diminutive 'Becky; rather than 'Rebecca' (and for that matter 'Tommy' instead of 'Tom' or 'Thomas') - in other words, a cynical ploy to generate doe eyed sympathy; 'we all know a Becky' it seems to imply. And just who are these Gatlin boys? Did they have a vendetta against Tommy, or were did just happen to be passing and decided to take their chances against a woman alone? Would the answer to this make the song any better or any worse? Again, Kenny aint saying.

Roger's delivery doesn't exactly raise the emotion bar too highly either - the 'there was three of them' is spoken almost with a 'tut' and the mild annoyance of a man who has just found a  scratch in his car bonnet."Tommy opened up the door and saw his Becky crying. The torn dress, the shattered look was more than he could stand.He reached above the fireplace and took down his daddy's picture. As his tears fell on his daddy's face, he heard these words again" and cue the good time, singalong chorus.

"The Gatlin boys just laughed at him when he walked into the barroom. One of them got up and met him halfway cross the floor. When Tommy turned around they said, hey look! ol yellows leaving. But you coulda heard a pin drop when Tommy stopped and blocked the door. Twenty years of crawlin' was bottled up inside him. He wasn't holdin' nothin' back; he let 'em have it all. When Tommy left the barroom not a Gatlin boy was standin'. He said, this one's for Becky, as he watched the last one fall".

So what's going on here? Has Tommy killed all the Gatlin boys or has he just given them a good hiding? The language and all the dropped 'g's' (which Roger's faithfully enunciates) are aimed to show a man at the end of his rope, but what of the ultimate outcome? Does Tommy get arrested and jailed for murder, or does the county sheriff turn a blind eye? Are there no consequences to these actions? Again, nobody here is saying and we then end with:"I promised you, dad, not to do the things you done" (I'll ignore the non attempt to at least try and make this re-written line scan because I've come to expect no better from the hacks behind this) "I walk away from trouble when I can. Now please don't think I'm weak, I didn't turn the other cheek,And papa, I sure hope you understand: Sometimes you gotta fight when you're a man". And because of all this, 'Coward Of The County' leaves me confused; what is it trying to say? "Sometimes you gotta fight when you're a man"? - are law, justice, due procedure and fair process just ideals we pay lip service to when it suits? And if they are, when can they be ignored? Is the gang rape of your partner the thin or the thick end of this particular wedge? Again, nobody here is saying, and as long as we can all singalong to the chorus at the end then who cares?

Well, I care, and what 'Coward of the County' boils down to is tub thumping jingoism populated by characters who aren't there with the underlying questionable morality obscured by a gloopy sentimentality that for all it's sugar leaves a sour taste in the mouth. I could get political here, but I won't. But suffice it to say that at least the execrable Toby Keith came right out with it in his 'response' to 9/11:

"Ohhh Justice will be served and the battle will rage. This big dog will fight when you rattle his cage. And you'll be sorry that you messed with The U.S. of A, 'Cause we'll put a boot in your ass, it's the American way"

But of course, Toby Keith didn't get to number one. Thakfully.