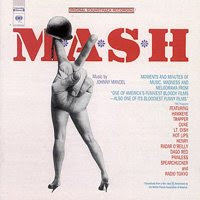 It is one of life's enduring mysteries as to why the likes of Ozzy Osbourne and Judas Priest are dragged to hell and back through the American courts by families who claim that a snippet of misheard lyric - when played backwards - has resulted in someone taking their life whilst songs unambiguously advocating suicide as a positive (anti) life choice get off scott free.* Like this one.

"I try to find a way to make all our little joys relate, without that ever-present hate. But now I know that it's too late, and..suicide is painless, it brings on many changes, and I can take or leave it if I please" - why spend hours fiddling around trying to spin a turntable the wrong way when you've got this egging you on?** But whatever - 'Suicide Is Painless' is a strange song to have at number one, being the theme from an American TV show that had been running by then for almost a decade. The imagery and tone of the song may work well in terms of a backdrop to a black comedy about the Korean war, but as a summer hit (and 1980 summer was pretty warm and sunny), it's a bit mystifying. Just who was buying it?

As a song, 'Suicide Is Painless' is very American, very late sixties (it was originally released in 1970) and very West coast, sounding a bit like an on-a-downer Laurel Canyon vocal group's take on 'Sealed With A Kiss' only with suitably nihilistic and jaded lyrics (written here by M.A.S.H director Robert Altman's son). It's too spooky and earthreal to be dismissed out of hand as a novelty record and yet it's too flaky to be regarded as anything other (see also Barry Maguire's 'Eve Of Destruction'), though there is a certain irony in having this follow Logan's song of optimistically waiting for a better day; a kind of 'Why Another Year' perhaps? Maybe then this was bought by people trying to tell Johnny something.....

* See for example/chief offender Blue Oyster Cult's '(Don't Fear) The Reaper', a hypnotic sway of seductive Byrds-ian jangle and cowbells that equates death with flying - it pushes the 'kill yourself' angle upfront and yet nothing is said, and there's something in the matter of factness of 'Came the last night of sadness, and it was clear she couldn't go on' that's positively bloody chilling.

** It kind of reminds me of Bill Hick's comment about cocaine addicts spoiling it for everyone else - if you think you can fly, then why not try and take off from the floor?