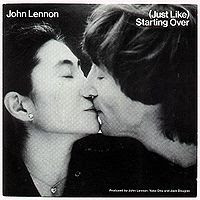 The very title of '(Just Like) Starting Over' is apt and ironic in equal measure. Apt, because this was Lennon's comeback single after five years in the wilderness and would also mark a stabilisation within his personal life, a kiss off to the drink and drug fuelled lost weekends of old and a public acknowledgement of a new commitment to his wife Yoko Ono after a period of semi retirement in which they raised their son. "It's been too long since we took the time no-one's to blame, I know time flies so quickly. But when I see you darling, it's like we both are falling in love again" - the autobiography is obvious and Lennon once remarked that his five year recording hiatus was largely due to the fact he no longer found music interesting.


If that truly was the case, then the artist seems to be in no mood to break any new ground on his own behalf - musically, '(Just Like) Starting Over' harked back to earlier days of Fifties rock and roll and doo wop, the upshot being that there's nothing remotely controversial or confrontational about it and was a letdown to those who expected a major statement of intent from the angry and angsty young man they knew of old, if only just to stick two fingers up at the bland contemporary fayre McCartney was churning out. The disappointment and 'ho hum' factor is neatly underlined by the fact '(Just Like) Starting Over' only managed to reach number eight on first release in October 1980 and was outside the top 20 when Lennon was shot in December, events which inevitably powered it to the top of the charts.

To be fair, though '(Just Like) Starting Over' is not the music Lennon will be remembered for in ten, twenty or a hundred years time, it is the sound of a man comfortable in his own clothes and at ease with his own legend. As a diversion, it's more than passable, but whether the subdued and retrospective middle aged tone of this and the whole of the parent 'Double Fantasy' album would be a signpost to any future music, or whether it was Lennon dipping his toes back in the water to build confidence again by doing what he knew best we will never know. And in that factor alone, the title of '(Just Like) Starting Over' carries a bitter irony in that a start was all that Lennon was allowed to achieve in this stage of his career.