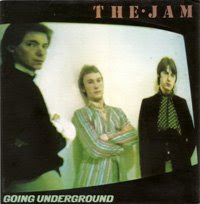 It's passed into music folklore that 'Dreams Of Children' was meant to be the A side of the new Jam single and 'Going Underground' the B. On one hand, it's easy to see why; following the angry bite of 'Eton Rifles' with something less sharp showed the musical development and progress that Paul Weller was starting to crave - after all, tunewise, 'Going Underground' is basically just a sped up re-mould of their earlier 'Down In The Tube Station At Midnight' and lyricwise a re-write of 'Away From The Numbers'. Serendipity at the pressing plant meant the sides were switched but it seems almost laughable in hindsight how any of the parties could have viewed 'Going Underground' as anything other than a number one.

Ah yes - 'Going Underground' in fact debuted at number one, no mean feat for any band twenty five years ago, but for a former punk band only recently written off, and spouting an angry, left wing agenda within a song decrying popularism, it was little short of miraculous.* Here, Weller's embittered lyric saw him turning his back on the modern world he was cocksure he had no need of a few short years earlier ( In 'This Is The Modern World' "Don't have to explain myself to you I don't give two fucks about your review" ) to angrily barking his despair at "The braying sheep on my TV screen, make this boy shout, make this boy scream!". Despair it may be, but it's despair that tempers its bile by serving it gift wrapped in a choppy, glorious surge of hard hitting pop that's straitjacket tight and flab free despite having almost more key changes in its entire three minutes than the whole of their first two albums combined.

And on that note, no matter how many times I listen to it (and it's frequently), I can never quite believe that it lasts less than three minutes from start to finish. The opening staccato guitar riff feels like a face slap to get both your attention and Weller's point across before careering through the gears to a fist pounding chorus as the band both take on the world and dance away from it into the counter culture. In a sense, 'Going Underground' marked the beginning of the end for The Jam; they never sounded quite so angry again, and when Weller sang of wanting to go where 'the brass bands play and feet start to pound.' he possibly had his favoured Northern Soul in mind, a scene that would influence and permeate the remainder of the band's output and ultimately lead to their break-up when he had taken his vision and ambition as far as he could within its power trio context. But whatever, no matter what Weller has done since, or may yet do, 'Going Underground' will be on the podium in any anthology of his best work. And deservedly so.