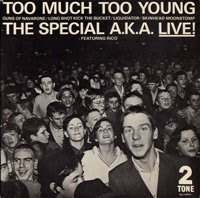 Reggae, ska, bluebeat etc had never been strangers to the UK singles chart; the likes of Bob Marley, Prince Buster, Jimmy Cliff, David and Ansell Collins had already provided a slew of one (or at least not many more) hit wonders throughout the late sixties and seventies.*  Such appearances though were sporadic, and the culture and movement associated with the music remained largely underground and highly resistant to exposure and commercialisation. It was also almost strictly the province of the Jamaican and Caribbean performers from whose culture it sprang. The only white artists to have any impact on the charts were the likes of Judge Dredd and The Piranhas and this only further served to make the tag of 'novelty' that seemed to attach to this genre a hard one to shift.

Led by the mercurial Jerry Dammers, Coventry's 'The Specials' were a mixed race band who created both a seminal fashion identity and zeitgeist (ugh!) defining record label (Two Tone) that hauled the rude boy look defiantly overground and served it up on a heavily politicised platter to an emerging generation who had precious little to dance about.**  Although marketed as an EP, the lead (and most played) track here was a live version of 'Too Much Too Young', a song modelled on Lloyd Charmers 'Birth Control' (from 1969) that originally appeared on their debut 'Specials' album. Recorded live at The Lyceum in London, 'Too Much Too Young' is a showcase for all the qualities that came to be associated with Two Tone in general - a relentlessly pumping ska rhythm greased with sweat and steam and cemented with Terry Hall's deadpan yet deathly serious singspeak that berates a young girl for falling pregnant with "You done too much much too young. You're married with a kid when you could be having fun with me" and "Ain't he cute, no he ain't. He's just another burden on the welfare state". Nasty maybe, but as topical as the weather - it could have been written and recorded yesterday with readers of the Daily Mail nodding their heads in approval to the sentiment if not the music.

Despite this, Hall's exasperated call and response to his own questions is far from a championing of some right wing agenda vilifying teenage pregnancies and demonising non working mums. Hall couldn't give a toss about the burden on the taxpayer and though his comments are honest and observant, he is focussing on one individual here rather than addressing a wider social problem and he's more concerned by the fact that this girl has now fallen unavailable to him when he'd clearly like to get his hand up her skirt - what it lacks in integrity it makes up for in honesty, and it's an honesty that spoke directly to the audience of the first teenagers to be reared on Maggie's Farm. You can almost feel his hormones working overtime as the band behind urge him to a climax of shouted frustration on "try wearing a cap."

The Specials would go on to greater things before messily imploding in a spectacular display of dis-unity (but more of that later), but this live format captures superbly the strengths of both band and genre - music for the feet, lyrics for the mind.

* To illustrate this, of the five tracks on the EP, three had previously charted in the UK. 'Long Shot Kick De Bucket' was a hit for The Pioneers in 1969, The Skalites took 'Guns of Navarone' to number 36 in 1967, and 'The Liquidator' was a number 9 hit for Harry J Allstars in 1969.


** This cross-over has been well documented and a definite line can be traced from The Clash (who covered 'Police and Thieves' on their debut album before creating dub mixes of their own and dabbling in early hip-hop) to likes of The Ruts, The Members and Stiff Little Fingers, who also appropriated skanking rhythms and techniques and overlaying them with their own political and social agendas.